Anatoly Ovchinnikov is considered to be a significant figure in the lapidary art world. Currently, as the chief artist of our art community “Art Sky”, he revives the ancestral traditions of the Ural masters.

Within the years of his work, Anatoly had taken part in more then 300 exhibitions, both Russian and abroad. And now, the exhibition “Lapidary Ovchinnikov: Ural dynasty ”, that took place in the Perm art gallery in the beginning of 2015 became the apogee of recognition of his creativity.

More then 150 art pieces, created by the master were showcased at the exhibition. These amazing objects made of stone struck and fascinated the visitors. Honey-golden selenite, ash-milk anhydrite, green-and-black Talkohlorit and other amazing Ural gems appeared before the astonished audience in the form of realistic animals and birds, fragile insects and mysterious inhabitants of the underwater world.

The roots of lapidary art in Ovchinnikov dynasty date back as early as the late 19th century. Now,Anatoly Ovchinnikov, honored artists of Russia, who spent almost 60 years working with the gems, is considered a real guru in this sphere of art. It was him, who give the contemporary Ural lapidary it’s own unique style and image. His works served as a model for countless copies that were spread over the country and abroad. Anatoly Ovchinnikov as well invented his own processing technology of stone – “sponge method” (оригинал –Bisquite method)All the members of his family are linked with lapidary arts. Works of his son Roman and daughter Tatyana, ex-wife Faina and grandson Dmitry were presented at the exhibition in Perm Art gallery as well. In order to allow the visitors to get acquainted with this famous and remarkable dynasty, the photos from the family archive of Ovchinnikov were showcased at the event.

The whole exposition consisted of three exhibition halls separated both territorially and thematically: “World of Nature”, “Family Tree” and “Workshop”. Each of the halls represented different aspect of life and work of the members of the dynasty. This was the first event where works of all the family was shown at the same time.

Each of these artist had already become famous far beyond the Perm region. Some of the works by Ovchinnikov are stored in the Kremlin Armory Chamber in Moscow, others are kept in art-historical museum in Zagorsk, and some are in the Perm art gallery, as well as in other museums, and also in the Russian and foreign private collections.

Fine art experts are astonished by the delicate artistic taste of Ovchinnikov family members. Experts are confident that it is hard to find equal masters in Russia. Indeed, one only has to look at the lively and a bit ruffled birds, fine plastic marten, predatory lynxes – and you necessarily forget that all of them are made of cold and silent stone.

The stone itself becomes alive in the capable hands of the master, who only makes a little work with him. Natural veins, patterns, motley spots on organic gems turn into shades of fur of an animal skin or feathers or fish scales. Anatoly Ovchinnikov had talked about this magical and fascinating process at the exhibition with great inspiration. He also shared few secrets of realization of his ideas. In order to transmit most naturally the beauty of the animal in the stone, he spends a long time watching the wildlife, and enjoys fine art photography. The artist admitted that a serious contribution to its understanding of the anatomy was made by his former hunting experience.

The exhibition of the Ovchinnikov dynasty – colorful and informative, was a really extraordinary and outstanding event. By holding this event Curator Alexandra Pestova was able to raise real strong interest to the lapidary art of the pre-Kama region. 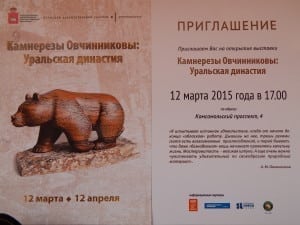