“The dream of shaman” impressed us the most…

Art Sky > “The dream of shaman” impressed us the most…

“The dream of shaman” impressed us the most.

The festival of stonecutters in Kama region was ended with the exhibition of the artworks of the masters.

The festival of the stonecutters in Red Yasyl village, in Orda district of the Perm region is held for the 3rd consecutive time. This year, masters from Kungur, Moscow, Kyrgyzstan, Nizhniy Tagil, Perm and Red Yasyl took part in it.

Today, 11 July was the last day of the festival in the Red Yasyl village in Orda district. The organizators of the festival – stone-cutting studio “Gerda Sky”, with the support of the Ministry of Culture, Youth Policy and Mass Communications of the Perm region.

This unique festival became known not only in the Perm region, but also far beyond. Lapidaries from various regions of Russia, as well as the local masters came to participate in the festival.

This year, among the participants were masters from Moscow, Kyrgyzstan, Nigniy Tagil, Bashkotorstan, Udmurtia, Perm, Kungur and Red Yasyl. The jury was represented by famous artists and stonecutters, among which:

The “Iskra” newspaper journalist, Natalia Sheyfer visited this event for the first time:

“I confess I was pleasantly surprised and delighted with the skills of the stone-cutters. I was particularly impressed with the sculpture “The Dream of Shaman” made by Aleksandr Suvorov from Glazov and the art-piece “Who is stronger” by Ibrahim Zhusupov from Kyrgyzstan”

During one week, which was given to the masters, tons of natural stones were turned into amazing sculptures.

The audience, talking quietly, slowly passes from one sculpture to another, carefully considering works of human hands. Just few days ago they were boulders and today… Ferocious wild boar, wolf, bear with cubs, buffalo, a huge turtle, female head, little family of owls… Every sculptor found something very different and special in his own stone. The faint hint of a woman’s profile, and it’s not anymore a soulless stone, but a feminine image… The Characteristic bend, and it has wings of a bird. However, each sculpture will find his admirer.

Even though the festival appeared in Red Yasyl recently, it was not an accident at all. The village is famous for more then one century and a half for the stone-cutting craft. The demand for unique pieces made by the Ural masters was high at all times. The villagers believe, that the stone-cutting craft will not be forgotten, because the younger generation follows the footsteps of their grandparents. The young wizard will write their pages in the history of stone carving art. 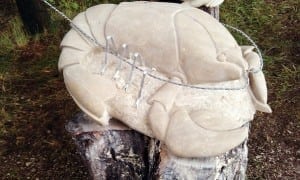 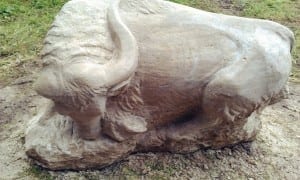 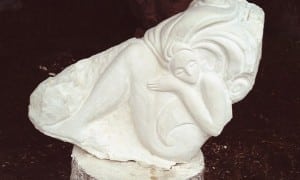